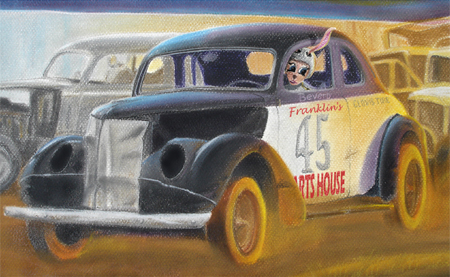 Beverly’s first track experience is behind the wheel of this junker. Her co-worker was supposed to drive it but when her boss decided it would be better for business to have a beautiful blonde driving it, Kyle sabotages the car and her first “figure 8 race” ends in an embarrassing disaster. “Fast Eddie” owns this car. It has a transplanted 239 Merc flathead with a single four barrel carb. Eddie races it without the hood so everyone can see how cool his engine looks. Unfortunately for him, it’s not quite fast enough to take on Beverly. An amateur criminal named Darrel drives this beat-up used car. Beverly drives through the small town that he calls home and she catches his eye. A chase ensues. The old Ford is totally stock with a lot of miles on the engine and throws a rod while Darrel is pursuing Beverly. This car plays an important roll in Beverly’s life. She acquires it from the local old school hot rodder, Jerry Chandler. It was mildly customized and had a transplanted 318 with a 2-fours set up from a ’57 Fury. In book II she and her friends take it on a cross-country trip and end up in another whirlwind adventure. Beverly’s first car! The old rust bucket came equipped with a 241 Hemi engine. Beverly paints the car primer black and spends all her money fixing the engine. She adds a 2-four barrel set up and all the latest racing equipment. It meets with an unfortunate demise in the story. This car is driven by Tom Brewster. It’s his mother’s car! The auto parts warehouse rep who provides all the replacement parts to everyone in town never fixed his own car, a little Austin Healy Sprite. It sits in the garage while he borrows this ugly pink Nash to go everywhere. Even Beverly feels sorry for him. It’s not exactly the kind of car a young man wants to be seen in. Especially not in 1964! 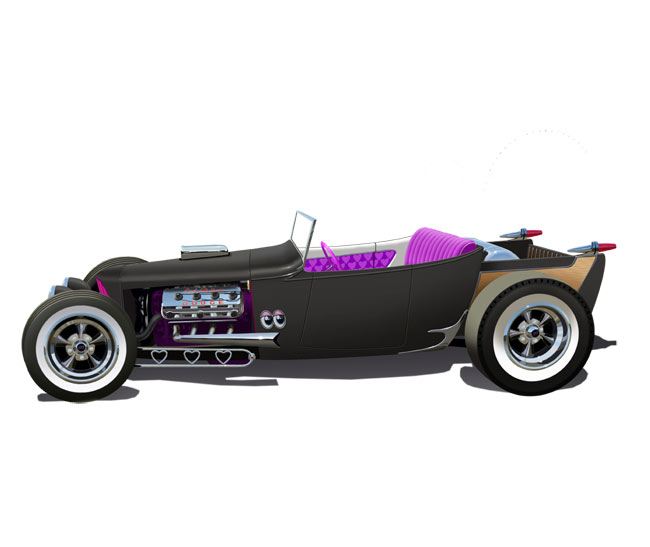 Otherwise known as The Bunny Bomb, this homemade hot rod started out as just bare model “T” Ford frame. With the help of Jerry Chandler, a sheet metal fabricator, she transforms a pile of rusting scrap metal into the coolest car in town. It’s powered by the 241 Hemi engine that was borrowed from her Dodge. Her classmates at the orphanage helped with the final assembly and made the upholstery in sewing class.